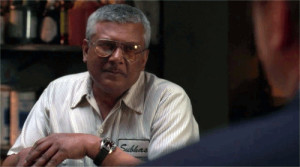 Leave it to me to be snooping around NBC.com after midnight, and perhaps this news was already out there but just in case you didn’t know… it needed to be shared. Subhas, who has played a custodian on 30 Rock for several years is actually a real-life custodian at Silvercup Studios, which is where the show (and most set in New York) is filmed. He is most known for his winning storyline in the season 4 episode “Khonani” where the show poked fun of the Jay Leno/Conan O’Brien late night situation in which Subhas’ garbage rounds were being replaced with Khonani’s. He also recently cameo’d in the latest episode where he slaps Kenneth.

In a video, posted below, where the crew discusses their cameos, Subhas details that everyone was extremely nice and supportive, even though he has had to play a short-tempered alter ego. Tina Fey mentions that Subhas’ personal philosophy of just being nice sometimes got in the way whenever he needed to be angry or yell.