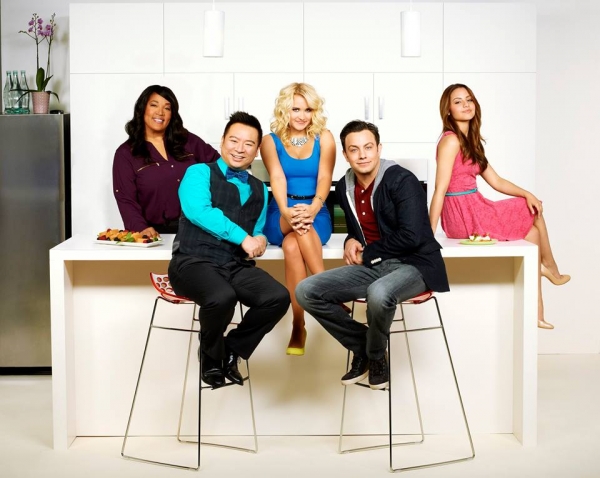 The highly anticipated return of ABC Family’s Young & Hungry is upon us! To get all you newbies up to speed (or at least give you the general premise)… this original comedy series follows Gabi Diamond (Emily Osment), a food blogger eager to land her dream job as a personal chef to an affluent tech mogul. After gaining a hot new job (and boss) things go a bit sideways when she finds herself in bed with said billionaire. As you can imagine, hilarity (and awkwardness) soon follows.

Jonathan Sadowski, who plays Josh Kaminski, talked with me about the Season 2 premiere of the smart and sultry series, that doesn’t steer clear of the ‘S’ word… yes, sex! Or the ‘D’ word… drama! (Get your mind out of the gutter… this is ABC Family, people). Since the pilot aired, Young & Hungry has continued to grow with buzz all over the web, not to mention this fun series is executive produced by Ashley Tisdale (Logan), who also stars alongside Osment and Sadowski. I can honestly say that the entire cast is refreshing, colorful, and downright hysterical.

If you’re not all caught up, what are you waiting for? After the fallout of last seasons finale, Sadowski hinted at a possible love triangle between Josh, Gabi and Cooper, let me in on some amazingly random facts about himself, and while we were chatting life imitated art as he spotted his own hilarious moment on the curb next to him. You’ll have to read this zany interview to find out what the heck I’m talking about!

So now, who’s hungry for this interview? (see what I did there…)

JONATHAN SADOWSKI: Josh is this billionaire genius, who in season one, winds up… you know, he wanted to get engaged to his girlfriend. She winds up breaking up with him and he wound up having a one night stand with his new employee, played by Emily Osment (Gabi). Josh is a big kid. He’s like a Star Wars and Star Trek nerd. He’s a very protective family guy, so that kind of adds to the whole awkwardness of the love triangle, because he is very protective, and now he’s also protective of someone he probably shouldn’t have had a thing with. He’s just kind of a big kid.

MM: I agree! So now, when we last left off Josh had kind of ditched Caroline (Mallory Jansen) at the altar, only to find Gabi in a liplock with Cooper (Jesse McCartney). When the show comes back, how much time will have passed?

JS: Approximately two nights- maybe a night or two. So it basically picks up right where we left off.

MM: That’s great. So #TeamJosh was trending worldwide on the season finale of the show…

JS: Ashley Tisdale called me up and was like, “You know you’re trending worldwide right now?” and I was like, “What!?” That was pretty flattering.

MM: What’s that like, knowing that the fans are so behind this character that you’ve embodied?

JS: It’s great. It’s great. You know, I think the goal of any actor is to have the audience relate to their character and to connect on some level. So, when you see a payoff like that it lets the actor know that the audience is just as invested in the character as you are, which is like I said, flattering.

MM: How has the overall response been from the fans on Twitter? Have you gotten any messages out of the ordinary?

MM: (laughs) That’s not good! Do you just kind of deal with it by ignoring it?

JS: How I deal with it is by ignoring it or blocking them. That’s all.

MM: That’s all you gotta do! People are a little crazy on the internet, that’s for sure.

MM: The entire cast is a hilarious bunch. How do you guys get any work done? Do you find yourselves doing a lot of takes?

JS: No, not really. It’s funny because tapings usually last a long time, like with other shows I’ve worked on. But we’re getting out of there. The thing that’s great about this cast is that everyone is very in tune with their character, and everyone is very professional– There is literally a guy right now, who is scratching his ass on the fire hydrant next to me on the corner. I’m not even kidding, I can’t make this up! I can’t. I’m trying to take a picture of it right now. Oh my god, that is so funny! (laughs)

JS: The cast is very in tune with their characters and they’re very professional. So, by the time we’re… we do pre shoots on Thursday nights and on Friday we shoot with a live audience. But, I mean, by the time Thursday rolls around it’s like a machine. Yeah, we get it done!

MM: That’s great that you guys can kind of set it aside.

JS: I’m not saying we don’t have fun on set, though. There’s a lot of playfulness and joking around. It’s a fun set to be on.

MM: That kind of kicks it into the next question that I have, which is who is the funniest cast member in real life?

JS: I mean, well, me obviously! (laughs) The funniest cast member in real life… well, I mean Kym Whitley (Yolanda) is… she’s hysterical. Kym is always on. She always walks in telling a story, and when she tells a story she always holds our attention and rehearsal just stops. She has everybody rolling.

Former tech nerd and Producer at a Literary Publicity Firm. Just a gal with a B.S. in Journalism, who loves covering the Entertainment world. Credits include World Wrestling Entertainment as the Intern Online Content Editor, NBC Universal for both The Steve Wilkos and The Jerry Springer Show, and at Red 7 Media where I created content both online and in print for the company’s various publications.

In my spare time, I enjoy watching and reviewing my favorite T.V. shows, as well as interviewing some of my favorite celebs in the industry. I’m sarcastic, opinionated, and thrive off of technology and social media.